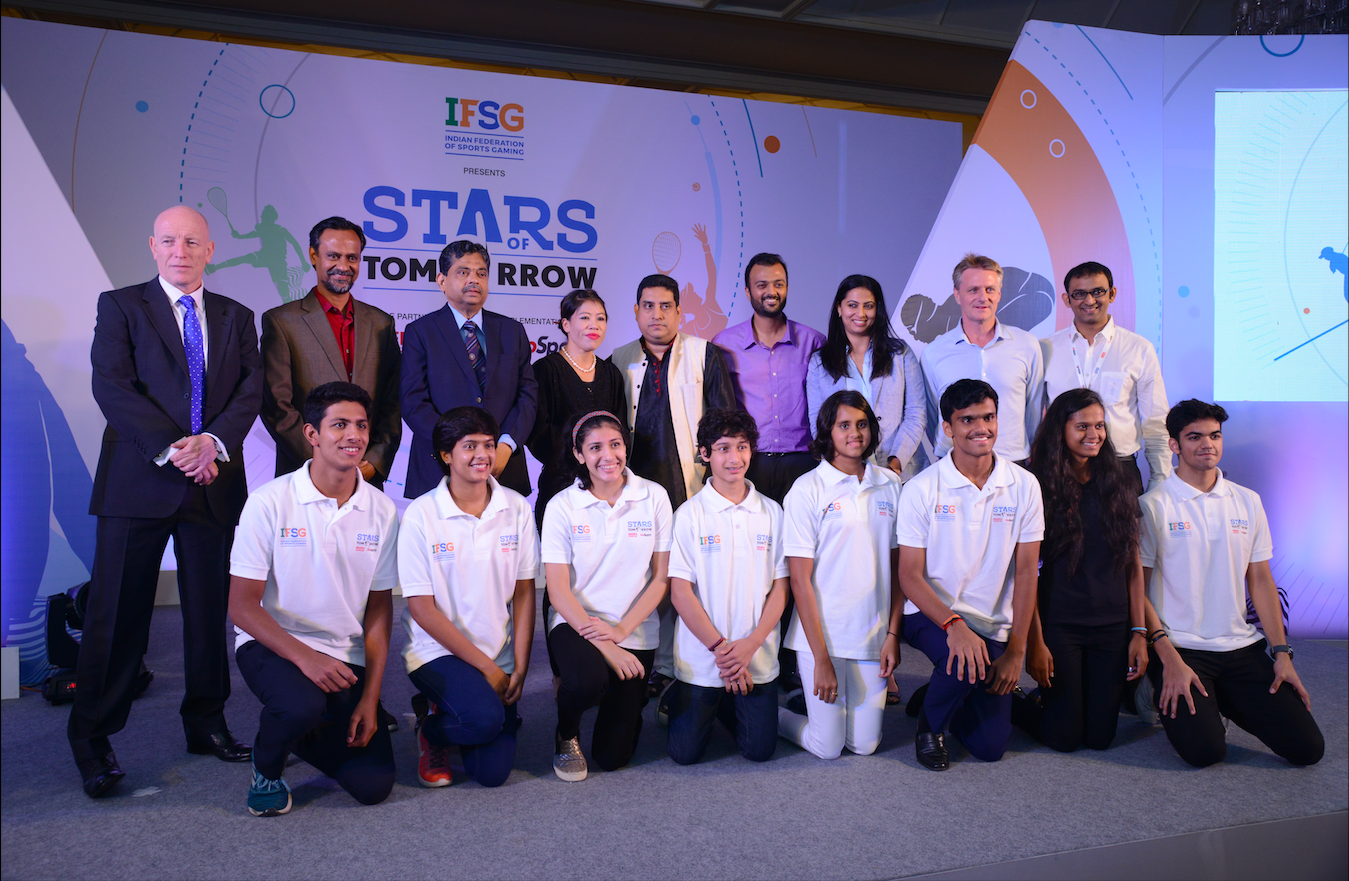 National, December 11, 2019: The Indian Federation of Sports Gaming (IFSG), India’s first self-regulated industry body dedicated to protecting consumer interests and maintaining high operating standards in the Indian Fantasy Sports industry, today announced the successful completion of the 1st year of their athlete development program – Stars of Tomorrow (SOT).  A remarkable accomplishment, the athletes to have won 32 gold, 20 silver and 6 bronze in Swimming, Sailing, Squash, Golf and Tennis all in a span of one year. With an aim to provide athletes with crucial support, the grant was utilized basis specific requirements of each athlete, that included training and living, competition expenses, sports nutrition, sports psychology, coaching etc. 37.76% of the grant covered competition expenses followed by 24.6% in coaching and 9.2% in sports nutrition.

Launched in December 2018, the 3-year programme by IFSG aims to identify and support India’s future sporting talent in diverse non-mainstream sports such as sailing, squash, tennis, swimming, golf. The 13 athletes selected, out of the 168 entries, under the programme are given critical support towards the fulfilment of their sporting goals by the ‘Implementation Partner’, GoSports Foundation. Dream11 Foundation is the primary contributor to this programme and has pledged Rs.3 crores to support the same.

Witnessing impressive results of the “Stars of Tomorrow”, John Loffhagen, President, IFSG, said, “At IFSG, we believe that sports have the power to change lives. We launched the ‘Stars of Tomorrow’ initiative with the objective of empowering athletes in their journey towards achieving excellence in their chosen fields, thereby contributing towards building India as a sporting powerhouse. We are overwhelmed to see the selected athletes excel and exhibit great performance as they represented India on global platforms.”

Talking about the association with the initiative, Harsh Jain, Director – Dream11 Foundation, said, “It is imperative to have public-private partnerships to bring about the much-needed support and change in the sports ecosystem. IFSG’s Stars of Tomorrow is one such initiative that empowers the Indian youth irrespective of demographics or any other societal discrimination while focusing purely on their sporting capabilities. It feels great to have an impact on the lives of these young athletes and realise how one step towards such support can be life-changing.”

Commenting on the performance of the athletes, GoSports Foundation’s Deepthi Bopaiah, Executive Director, said “The SOT program enabled to identify and support promising young athletes, who are, and will continue to represent India at a global level and prove the nation’s capabilities. India is warming up to non-mainstream sports, but still needs a lot of groundwork in place to build as a holistic sporting nation.”

The success of the IFSG’s initiative clearly reflects the journey and potential of each athlete. These athletes have shown enormous growth across various sports categories:

Suvana C Baskar (Swimming), with a current timing of 2:22.03 in 200 m Backstroke this year, she slashed more than 3 seconds of her personal best time, enabling her to reach new heights in 2019. She won a total of 26 international and domestic medals, including 2 Golds and 1 Silver at the Malaysian Open Championship and a Bronze in the Asian Age Group Swimming Championship.

Khushi Dinesh (Swimming), with a personal best time of 4:30.8 in 400 m Freestyle, established herself as one of the best young female swimmers in the country. Along with a good nutrition programme coupled with specialised strength and conditioning training, she is able to constantly improve her performance. She represented India at the World Junior Championship 2019 in Budapest.

Advait Page (Swimming), with a personal best time of 8:00.76, slashed a whole 9 seconds as compared to his previous year’s performance. He has achieved the B Standard Qualification mark for the Tokyo 2020 Olympics in the 800 m Freestyle Event.

Nethra Kumanan (Sailing) finished 2019 with a World Ranking of 78, up 9 places from last year. This can be attributed to a strong training programme at Gran Canaria Sailing Academy, Spain along with the help of a mental conditioning coach. She was adjudged the overall winner of the Laser Radial Women’s Category at the National Sailing Championship, Hyderabad held in July 2019.

Aryan Goveas (Tennis) reached the semi-final stage at 5 international tournaments in 2019, in the doubles category. He was also a finalist in the Singles Category at the Fenesta National Tennis Championships, Delhi and trained at the David Ferrer Academy for a month. A disciplined training and nutrition programme is constantly propelling him forward.

Yash Fadte (Squash) won the Asian Junior Championships in 2019, along with 5 podium finishes domestically.  He is currently the number 1 ranked U-19 Male Squash player in India and also represented the country at the World Junior Championships held in Kuala Lumpur. He underwent a high-performance training stint with Chris Ryder in the United Kingdom.

Pranavi Urs (Golf) despite being an amateur golfer, finished runner up in 3 Professional events in India. With a specialised nutrition and fitness plan, Pranavi is on the road to becoming a successful professional golfer in the years to come. She underwent a high-performance training stint with Steven Giuliano, a renowned Australian golf instructor and member of Professional Golf Association.

More on the Stars of Tomorrow program: https://sot.ifsg.in/

Formed in 2017, the Indian Federation of Sports Gaming (IFSG) is India’s first and only self-regulatory industry body established to protect consumer interest and create standardized best practices in the Fantasy Sports industry. IFSG aims to create a thriving ecosystem for users and operators by setting out guidelines for a common set of practices, setting standards of operation and creating a regulatory framework to protect the user and operator interests.

IFSG works with key industry stakeholders and liaisons with the Government and policymakers to create standardized best practices and set industry benchmarks with a strong governance structure, thereby protecting its users and operators. IFSG currently has 32 members across Fantasy Sports operators and Sports analytics firms.

Dream11 Foundation aims to positively impact the growth of sports in India. The foundation looks forward to providing sustainable growth impetus to deserving individuals, societies, bodies or organisations working towards the growth of sports and sports ecosystem of our country. For more log on to: www.dream11foundation.org

GoSports Foundation is a non-profit venture working towards the development of some of India’s most talented emerging and elite athletes, competing in Olympic and Paralympic disciplines. Joined by India’s only individual Olympic gold medalist Abhinav Bindra, former Indian cricket captain Rahul Dravid, All England Badminton Champion Pullela Gopichand on their Board of Advisors, and former Indian cricket team physiotherapist John Gloster as their Head of Sports Science, their vision to Enable Sports Excellence is premised on the belief that sporting champions are created when the right talent gets the right support at the right time.