Nethra Kumanan’s interview with Sportstar on being the 1st woman olympian sailor, mentions Stars of Tomorrow and DSF’s contribution 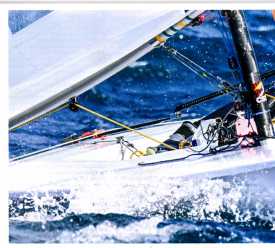 Working with a sports psychologist changed Nethra Kumanan’s approach completely. She has now made it to Tokyo Olympics in style – with a race to spare – at the Asian Olympic qualifiers in Oman.

Her failure to qualify for the 2016 Olympics rankled laser radial sailor Nethra Kumanan no end. She knew she was easily one of the best at the Asian qualifiers in Abu Dhabi, but she would lead most of the race only to finish at the back of the fleet. â€œI was so stressed out,â€ she says.

The arrival of sports psychologist Nim-

60 rod Mon Brokman, with the support of the GoSports Foundation,, changed the two-time Asian Games participantâ€™s approach completely. Nethra went on to win bronze at the World Cup in January 2020, and she has now made it to Tokyo Olympics in style â€” with a race to spare â€” at the Asian Olympics Qualifiers in Oman, becoming the first In- 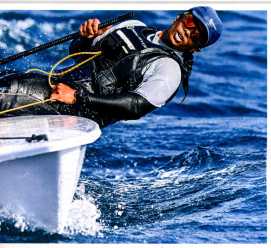 Riding the waves: “It has been difficult for the government to find support for us.

Now that we have qualified, things could get better not just for us, but also for future generations,” says Nethra.

dian women to achieve both feats.

â€œMon directed my focus and energy in the right way: recovering when I need to recover, letting go of things that were not important, and trying to be more in the present moment,â€ the 23-year-old Nethra told Sportstar in this extensive interview.

You told us the other day that becoming the first-ever Indian woman sailor to qualify for the Tokyo Olympics was a huge milestone for you. Can you take us through the winning moment from Oman and the day after?

I qualified the day before the medal [final] race. I was guaranteed the spot and the silver medal. We knew that earlier than the rest. At the time I hadnâ€™t realised [that I had qualified] and it was my coach (Tamas Es-zes) who informed me. We waited until it was official the next day. I did lose the gold medal [to Emma Charlotte Savelon of the Netherlands] and I was quite upset.

I was doubly happy as Vishnu Sara-vanan, who is my good friend, made it to Tokyo [in the laser standard class]. There were a lot of emotions. More than the celebrations, I was really relieved that I was able to do it finally. We were surrounded by a huge Indian contingent at the event. We had a really good time.

What do you expect at the Tokyo Olympics?    ,

I hope I can sail the event with no pressure and no stress. Do the best that I can do. With the training that I have, I can improve on the things I need to improve and see what results I can achieve. Itâ€™s an experience for me to learn as much as I can. I am keen to fully

Could you describe in detail the 2016 the Tokyo Games: Olympics qualifying in Abu Dhabi?    Varun Thakkar.

In 2016,1 knew I could beat one of the girls, Nethra Kumanan. who did qualify then. She was very young Vishnu Saravanan and very new. Everyone else I know I had and K.C. beaten them before. Just like I did it in this Ganapathy. event [in Oman], except that I didnâ€™t have special arrangement any mental preparations. We did try working out with a psychologist, but it was not sports-specific and I donâ€™t think it worked out so much.

There was a huge mental stress. I could have qualified because I knew I was good enough, but I was so stressed out. I would win every race but would still finish at the back. It was difficult to lose when I knew I could do it. I changed the team around me. I added a sports psychologist to my team, which the GoSports Foundation helped me with. GoSports found me a good psychologist to support me. For the past two years, the results have started to show and I am glad for that.

Tell us about your association with coach Tanias. What difference did it make to your approach and technique?

Tommyâ€™s Academy [run by Tamas] expects the athletes to understand why the â€œworkâ€ they ask us to do. Thatâ€™s what makes the difference. Especially for me being from a school like Krishnamurthy Foundation of India, which is a forward-thinking and thought-provoking kind of school where we were told to question everything. Gana [K.

C. Ganapathy, who qualified for Tokyo in the 49er class with Varun Thakkar] and me studied in the same school. Leading up to 2016, we were told not to question so much.

When I made the change [to Tamas] a couple of years ago, I found that his approach worked very well, better even. The best thing about Tommyâ€™s Academy is everyone works on different techniques and he gets the best out of us.

As you had mentioned earlier, you were shaky mentally. How did the sports psychologist from Israel, Nimrod Mon Brokman, change your mind?

Mon didnâ€™t change my mind. We put in long-term work and he directed my focus and energy in the right way. Recovering when I need to recover, letting go of things that were not important, and trying to be more in the present moment. I found in my whole life that whatever things I tried to do if I was distracted, I would only be half as good as I could be. It happens to this day. But with sailing, at least we are working on it. I think it will help for the rest of my life. To be in the present, be focused and be objective. Thatâ€™s why Iâ€™ve started to find it easy to perform.

What role did the GoSports Foundation play in your career?

I am supported by GoSports Foundation under the Stars of Tomorrow programme partnered by Dream Sports Foundation and FIFS. They found Mon for me. The mental conditioning has been something that really helped me. During the pandemic, when I was stuck in lockdown in Gran Canaria (Spain), they provided me with nutritional counselling. That has also been a huge help for me to learn how to fuel myself and my training.

Any particular event or memory that made you focus on sailing as a career?

I think because as a young girl (20 years old) I qualified for the Asian Games [2014 in Incheon]. I did quite well at the national championships.

I kind of knew that I had so much more to offer than I was showing in big important events. I did struggle to focus on the right things. I would always lose focus when there was stress involved. Racing is, in a way, stressful.

Even though I knew it jnyself, a lot of people kept telling me that I was talented and had potential. When I had to leave school because it offered just 10 days off in a year and sailing took a lot more time as we had to go to the nationals and for training camps. When I left school for another one, I

The system â€” the state and central governments â€” have helped as much as they can for big events like the Asian Games, Worlds and Olympic qualifiers. Sponsors have been difficult to get and the media attention has been quite low until the Asian Olympic qualifiers in Oman. The obvious reason is that no one knows the sport. It is not like cricket, which has so much connect with the people.

knew I could not quit sailing. So I quit Long-term plan: school. I went to the Asian Games [in 2014] “Mon (sports and then the 2016 Asian Olympic qualifiers psychologist for Rio where 1 had a really good chance. I Nimrod Mon went to Israel that year to train full time to Brokman) directed see if I could make it.    my focus and

I got very close [to qualification], but the energy in the right lack of mental preparation was the reason I way: recovering couldnâ€™t make it to Rio.    when I need to

Then I took a year off when my dad quit recover, letting go his job and started his own company. And of things that were then I slowly returned to sailing and had so not important, and much fun. I went to Malta first and found trying to be more Tommyâ€™s Academy.    in the present

I was also supported by World Sailing moment.” says under the Emerging Nations Program in Nethra.

2017 for the Olympic cycle. Now I am really special arrangement glad that 1 got stuck in Gran Canaria due to Covid-19, and I learnt so much and have grown so much.

Sailing is an expensive sport. How did your parents manage?

I have been very lucky that my dad continues to support me. It is very expensive and I try to save what I can as I am not extravagant. Itâ€™s not been too difficult for me because my dad is there for me whenever I need him.

The Yachting Association of India and the Sports Authority of India have helped as well with big events. Now I am hopeful of more sponsors coming into the sport. Anyone interested? (Laughs.)

As a woman and a competitive sailor, what has the sport taught you?

The journey has taught me that it is important to never stop fighting and believing in yourself. I have had moments like that and I regret it. If you go looking for something, you will find it provided you put in the hard work. It might seem cliched, but I would still say it: it is not about the destination, but about the journey.

The most rewarding thing is the fact that how much Iâ€™ve grown and how much I have learnt about myself, the sport and everything around me.

How has the system, which includes the state and central governments, sponsors and media, been helping the sport grow over the years?

Itâ€™s tough with sailing because not many people know about it. And most people confuse it with rowing. It has been difficult for the government to find support for us. Now that we have qualified, things could get better not just for us, but also for future generations.

I hope a lot more take up the sport. So far, the sport in India has not seen a crazy [following], but we hope with the qualification of the four of us, with Varun Thakkar-K. C. Ganapathy in the 49er class, and Vishnu Saravanan in laser standard and myself,

How much influence has the Tamil Nadu Sailing Association (TNSA) had on your career?

TNSA is my home club, itâ€™s where I started to learn the sport. They are, in a way, my foundation.

There were a lot of summer camps, which I hope we can bring back soon. In the first few years, TNSA helped us with the boats, equipment, taking part in the nationals, coaching and other thjngs. It was a motivating pnd a fun place to be.

I spent all my weekends there in the club for a lot of years. It is a special palace and I am quite sad that they had to move out and find a new place. They are looking for support as well.