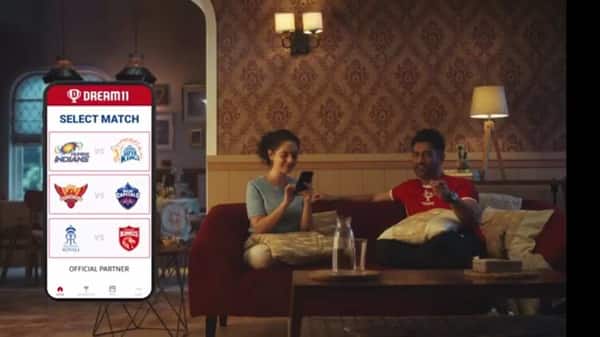 Fantasy gaming platform Dream11 has launched a set of new six campaigns which are being promoted during the ongoing Indian Premier League (IPL) 2021. With a tagline ‘Team Hai Toh Mazaa Hai’ (loosely translated to if there’s a team, then there’s fun), the campaign centres around fans and their love for cricket.

Created by advertising agency Tilt Brand Solutions, the 25-second ads are a set of nostalgic and light-hearted TVCs, that strike a chord with cricket enthusiasts who have experienced fun, loyalty and pride while playing gully cricket with their friends as a team. The films feature cricketers Rohit Sharma, MS Dhoni, Shikhar Dhawan, Hardik Pandya and Shreyas Iyer as they have fun playing cricket with teams in their neighbourhood. The films highlight the significance of having a team or a squad in real life to enjoy playing sports with and overcome challenges together as one, just as users of Dream11 enjoy their favourite sport by creating their own fantasy sports team. The catchphrase of this year’s campaign is ‘Dimaag lagana hai toh Dream11 pe lagaa na’.

The campaign takes a functional, call-to-action approach that encourages viewers to use their skills/knowledge and build the best fantasy sports team on Dream11.

“We believe that there’s headroom for growth in the fantasy gaming category. Dream11 has already crossed over 100 million registered users. Our key focus is driving new user acquisitions among sports fans and driving engagement with our existing user base and retain our market leadership,” said Vikrant Mudaliar, chief marketing officer at Dream Sports and Dream11.

The advertisements are being promoted across local languages including Hindi, Bengali, Marathi, Malayalam and Kannada across Star Sports channels as well as Disney + Hotstar.

These ads are also being promoted across social media accounts of Dream11 and its brand ambassadors (on Twitter, Facebook, Instagram and LinkedIn). In addition to the TV ads, the platform has also brought new brand ambassador, social jockey and Indian women’s cricket all-rounder, Jemimah Rodrigues for promotions.

“While these are still early days for IPL 2021, as compared to IPL 2020, we have witnessed an increase of almost 40% in daily user engagement and nearly an 80% increase in the time spent by the users on the Dream11 app, owing to the new features such as live commentary, scorecard, etc,” Mudaliar added.

Dream11 is an official partner of IPL 2021 and it powers the official fantasy game of the league.